As I’ve probably mentioned before, we live in a bungalow. Said bungalow has two water closets: a bathroom, done out in Exorcist pea soup green, and a separate toilet by the front door. With abject fondness we refer to this as ‘the downstairs loo’. (Living in a bungalow also gives us the capacity to confuse semi-regular visitors when they call, because I simply tell them that Emily’s gone upstairs.)

A few years back, I was having a rotten day, and Emily bought me a copy of Doctor Who Adventures to cheer me up. One of that week’s free gifts was a large poster of Tennant – and, having nowhere else to hang it, we stuck it in the downstairs toilet. (In the spring of 2010 I did overlay his face with that of Matt Smith, but it didn’t last.) It’s kind of nice to have him there, but every time I stand at the bowl it does feel a bit like he’s smirking at me or something.

Sorry about the mildew. We are working on it.

Also in the downstairs toilet: a calendar, also from DWA – I bought an official one when it was disgustingly low in price and then cut up the pictures and pasted them around the house for Joshua’s party. And then there’s this. 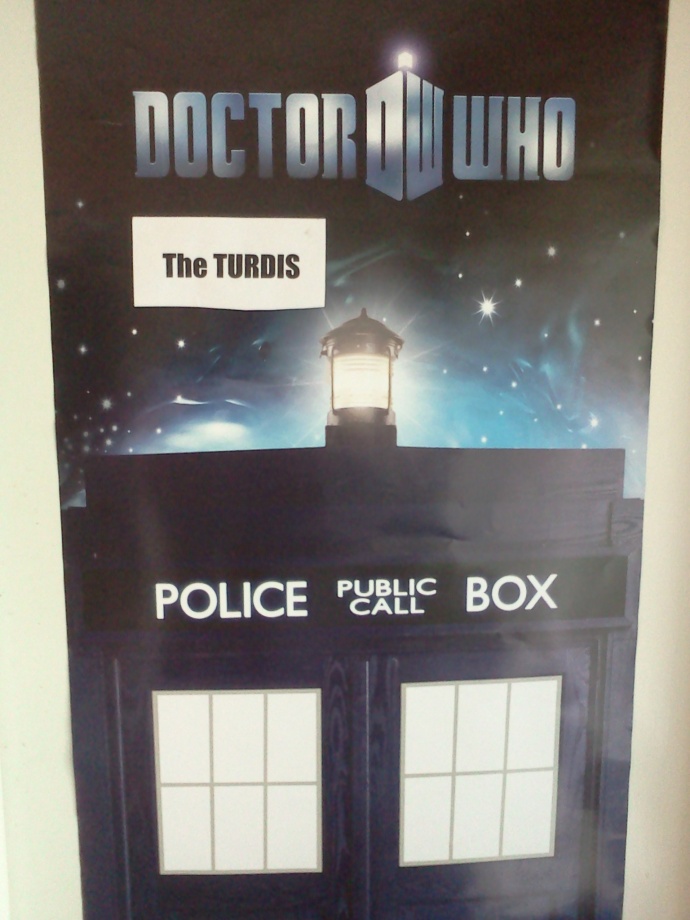 I know it’s lame. And hardly a new gag. But I was pleased, because it coincided with a visit from my mother-in-law. “There’s no point being grown-up if you can’t be childish sometimes.”

James: Yes, but I came up with an acronym! Transporting Urine / Related Deposits Into Sewers. So ner.

Gareth: Transporting Urine / Related Deposit Into Sewers. How many times do we have to go over this, James?

He was right, dammit.