Edward’s had a birthday this week and I have a service to finish planning and I’m rather short on time, but I have spared as many hours as I could to bring you the latest installment of VERY IMPORTANT CLUES AND SIGNS in ‘Face The Raven’, in advance of tomorrow’s episode. I’m sure you’re all inundated with Black Friday emails and don’t want to spend a lot of time reading, so let’s get on, shall we? 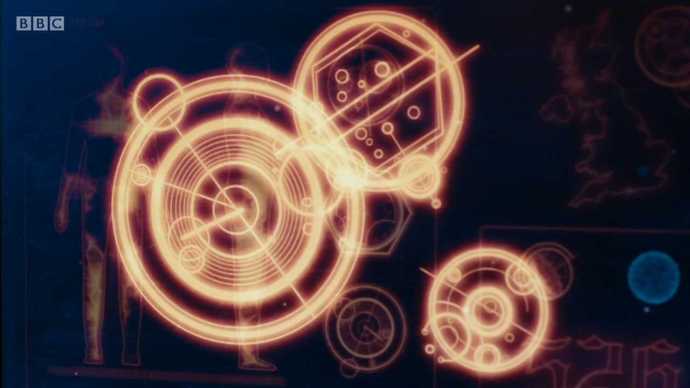 The smaller circles are red herrings (more on the colour red later): it is the larger one that we need to examine. It resembles a vinyl disc, but for the sake of the argument we need to assume it’s a clock. Note the presence of lines that refer to ‘Day of the Doctor’ and the minisodes that surrounded it:

As a purely ephemeral point, while the outer circles do not in themselves allude to anything specifically Whovian, the image as a whole does chart the development of recorded music, from the vinyl record to the CD (bottom right) and finally digital downloads (the dots in the remaining circle CLEARLY AND UNAMBIGUOUSLY referring to fragmented sectors on a hard drive). And all in the space of a second or two. What other microcosmic technological histories are contained in other episodes? Shall we do a series? We might, in the new year. I’ll tell you, you’re lucky you have me to fish this stuff out.

This has a number of connections to the Tenth Doctor, but also his immediate predecessor. It helps if we know that episode 526 of Doctor Who was part one of ‘The Leisure Hive’. First, there’s that word ‘Hive’ – an image which calls to mind the bees that the Doctor and Donna follow in ‘The Stolen Earth’. Also of note: ‘The Leisure Hive’ begins in Brighton, or Bright On, which is what happens in ‘Journey’s End’ when Donna becomes a super-genius (for about ten minutes) when she touches a glowing hand. Now look at the image scan of Riggsy on the monitor, in which assorted body parts highlighted with circles. The thighs are highlighted – we may rearrange ‘Thigh’ to ‘High T’, which occurs in Agatha Christie’s home (offscreen) during the events of ‘The Unicorn and the Wasp’.

However, in order to unpack this fully, we must look at the number 526 in a different light. Note the presence of the HEXagon in the middle of the column of Gallifreyan symbols, and recall that Thomas Hector Schofield – Hex for short – travelled with the Seventh Doctor, and that we may obtain the number 7 by combining the digits 5 and 2, as shown on the right hand side of the screen.

What does all this mean? Well, if we examine the lyrics of Tim Rice, we find the following:

This, as any musical aficionado will tell you, is from ‘Don’t Cry For Me, Argentina’, and from this we may UNAMBIGUOUSLY CONCLUDE that the next series will feature an episode in South America. With the Ninth Doctor. Oh, and Jonathan Pryce was in the film version of Evita. I’m just saying.

Here’s Clara, Riggsy and the Doctor on the streets of London.

Note that the sign points to several places: The City, the West End, Holborn and the Marble Arch. The fact that it is a young woman, or a GIRL, standing underneath the sign, is CLEARLY SIGNIFICANT, instantly calling to mind ‘West End Girls’, a song by the Pet Shop Boys. Lest we forget, David Tennant chose his stage name from frontman Neil, and thus THIS IS ALL CONNECTED WITH THE TENTH DOCTOR.

But it goes further. Holborn features heavily in ‘The Web of Fear’, while the Sixth Doctor finds the remnants of Marble Arch in ‘The Mysterious Planet’. Combining these two episodes with ‘City of Death’ and rearranging them slightly, we get ‘Demystify The Web Planet. Fear Her? Hotfoot, suit! Ace!’, which implies the THE IMMINENT RETURN OF THE ZARBI, AND SOPHIE ALDRED.

Finally, look at the large letter ‘C’ in a red circle. The Red Sea is an expanse of water sandwiched between Sudan and Saudi Arabia, and is indicated by the red marker on this map.

Which, of course, means absolutely nothing until we do this. 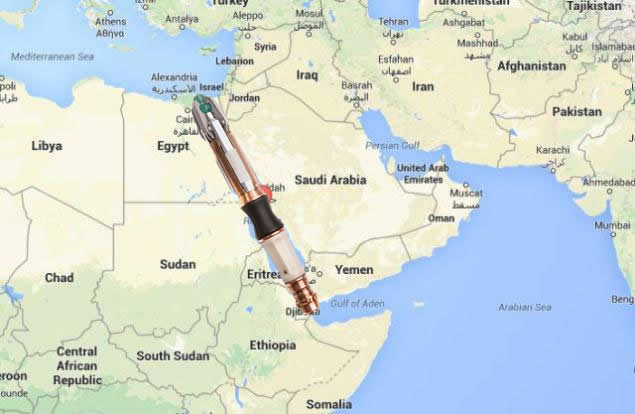 Last image of the week; we won’t dwell on it for long. But look in particular at the highlighted words.

Yes, well. I think that tells you everything you need to know, right?