Doctor Who meets Beauty and the Beast

Let me tell you a story, children. Once upon a time there was a concept called regeneration and it involved the transition of one actor to another. In the 60s, 70s and 80s this was achieved using filters and white-outs and whatever trickery the BBC could afford at the time. At its best, it was highly successful. At its worst, it was Sylvester McCoy in a blonde wig. In 1996, they experimented with facial morphing, presumably because of Terminator 2 and the ‘Black or White’ video. It was a little strange to behold – Doctor Who, in actual special effects shocker – but it sort of worked.

Then came the Golden Sparkly Energy thing. It’s been used ever since, in every disappointingly familiar regeneration (Smith’s aside; at least that one’s quick) and if it looks familiar, that’s because they nicked it from Disney. Specifically, that bit at the end of the otherwise splendid Beauty and the Beast where Belle succumbs to her Stockholm syndrome and her grizzly captor turns into an Aryan Chippendale. It’s a wretched scene, which – whilst nonetheless remaining true to the spirit of the original story – says an awful lot about Disney and its obsession with appearances, often at the expense of what was actually best for the customer. (You will know this if you visited Disneyland Paris, as I did, back in the early days: the place was immaculate, but the shuttle buses were an unruly scrum. They’d hired people to pick up litter, but no one who could facilitate a queue.)

There are other versions of this. It’s an obvious joke: cellular regrowth instigated by magical sparkliness. But this one attempts to match the dialogue. This involved an awful lot of chopping and changing and shifting things around, which is not in itself a bad thing because otherwise you have Disney on your back for copyright infringement. At the beginning Eccleston has a long monologue, which I opted to present as a voiceover while we established the castle: this is actually the opening pan out from the beginning of the film, reversed. Am I saying that the Ninth Doctor was the Beast and his impossibly sexy successor is the human (and incredibly vain) prince? You decide.

I sent the completed version to Gareth.

“It might have worked better,” he said, “if I knew anything about Beauty and the Beast!”
“You got the idea, surely?”
“She kisses him, and we learn that looks are more important than personality?”
“And that’s why I love Shrek.”

But I’d like to close by returning briefly to Colin Baker, who we were discussing over dinner just yesterday.

“So he didn’t film his regeneration?” Emily said.
“He didn’t,” I said.
“So what actually killed the Sixth Doctor?”
“We don’t know for sure. But the first thing that happens in that episode is that the TARDIS is attacked, and when the Rani steps on board, the Sixth Doctor is lying on the floor, face down. And then they turn him over, and – ”
“It’s Sylvester McCoy.”
“Yeah, in a wig.”
“And that’s all you get?”
“Well,” I said, “Big Finish eventually filled in the gaps. They gave him a proper send-off, and there was a whole story with the Valeyard and loads of other people. But on TV, just the wig.”
“So McCoy’s lying there,” she said, “and you can see it’s him, but in a wig?”
“The moment they turn him over, they stick a filter on the screen. One of those photo negative effects. So it’s obscured and you’re supposed to not be able to tell. Except of course you can. What can I say? They did the best they could under difficult circumstances.”
“Right, right,” she said. “But there’s no reason why the McCoy in a wig thing couldn’t have been an entirely new Doctor. You know, a secret regeneration.”
“What, another one? Who just happened to like the same clothes?”
“Yep. So you have the Sixth, and then he regenerates into the Seventh, but that’s not McCoy. Which would make – ”
“Which would make McCoy the Eighth,” I said. “Oh, I’m going to have sooo much fun trolling the fandom with this one.”

And I will, but in the meantime – 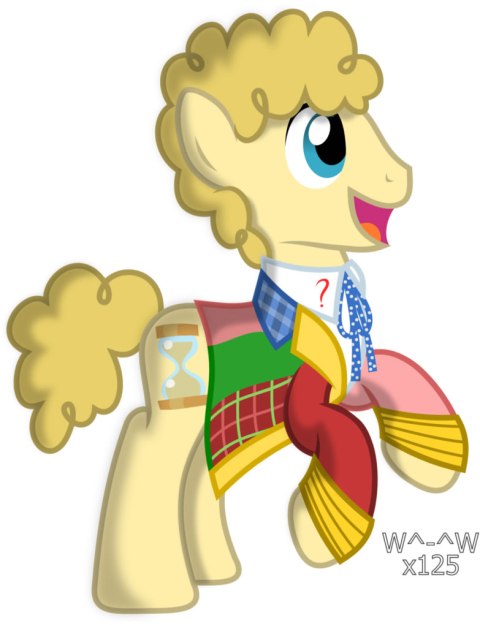