Right: after that brief hiatus while I rambled around the Yorkshire moors (we may come back to that another time) it’s back to business as usual this week with our regular instalment of VERY IMPORTANT CLUES AND SIGNS.

What do we mean by this, precisely, dear uninitiated reader? Yes, you. The one who just joined the Facebook group this week and randomly clicked the link button because you thought you might get spoiler information. Well, you’ve come to the right place. Because we’ve been all through ‘Arachnids in the UK’ and combed it with the same meticulous dedication – not to mention the same grizzled expression – adopted by my wife when she’s delousing our children’s hair. As I’ve demonstrated in here on countless occasions, absolutely NOTHING in this show is an accident – and absolutely everything can mean something VITALLY SIGNIFICANT that we’re going to come back to later in the series. It’s simply a matter of sorting the wheat from the chaff – an unseemly task at the best of times, so it’s lucky you’ve got me to do that for you. Buckle up, folks. It’s going to be a bumpy ride through Conspiracy Central, so I hope no one’s just eaten.

(As an aside, Emily suggested on Sunday evening that they should do an episode of Doctor Who with giant head lice. Who’s up for Rob Brydon as a cantankerous exterminator?)

We start at the beginning, or near enough.

This, you’ll remember, is the charming scene that sees the Doctor drop off her companions in one of the nicer parts of Sheffield, just before Yaz invites her up for a little something. At the moment I grabbed this frame, Whittaker is just about to slope forlornly off into the TARDIS, presumably to nab a custard cream and have a good cry into her Joanna Trollope. But look very carefully at the exact position they’ve left the camera. The partial obscuring of the door sign isn’t an accident – oh no indeed. It’s been left that way deliberately so that the visible letters form a particular set of words – at least they do once you’ve rearranged them, which is what I did. They spell:

This ought to serve as a CLEAR AND TRANSPARENT INDICATION of two incredibly exciting crossover events: one involving Harry Potter, and one involving Legends of Tomorrow, specifically Arthur Darvill’s time travelling anti-hero Rip Hunter. Whether or not he’ll actually be dressed in the centurion outfit Rory wore is still very much on the table, but my guess is they’ll put it in as an Easter Egg. That’s what I’d do. 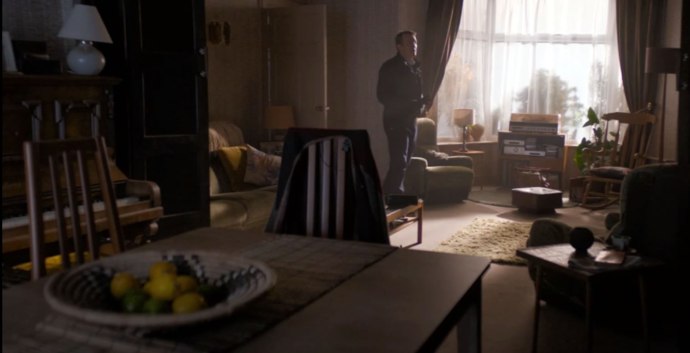 There are eight items of fruit in that bowl: five lemons and three limes. The use of bananas in the Whoniverse is, of course, common knowledge, whether it’s the Tenth Doctor waving one at the clockwork robots, Matt Smith whipping away River’s gun and replacing it with something equally phallic, or John Hurt eating several bananas on the trot in Krapp’s Last Tape. Lemons are somewhat harder to place, although one notes that the Tenth Doctor knows of a planet with highly evolved, humanoid lemons, perhaps in the manner of this chap. 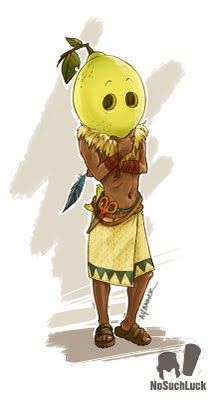 However, the limes are a little less abstract. They pertain to three specific objects:

From this we can unambiguously conclude that a future series of Doctor Who will be featuring a special LIVE EPISODE filmed on the housing estate formerly occupied by Lime Grove, directed by Waris Hussein. The episode will feature Charley Pollard, coming face to mask with Magnus Greel. We know this from looking at the chair, which is positioned so that the slats mask the notes G-F-A-C-E on the piano. As I said: there is no such thing as coincidence.

(As an aside, have you seen Waris Hussein lately? He looks incredible. Somewhere in an Ealing attic there is a portrait covered in wrinkles.)

We’ll be back with more important observations, right after a visit to the bathroom.

You will note the three bottles of bath cream sat at the top of the screen. You will also note the mobile phone that is parallel with the third. In order to unpack this it is necessary to take a brief dive into history: namely 1973, the year the mobile phone was first unveiled to an unsuspecting world by Motorola’s Martin Cooper. Also of note: the left bottle is silvery-white, the second is darker. The third is the first in the sequence to escape the drab world of monochrome, assuming a tasteful blue appearance.

Thus we have one silver-haired Doctor, one with darker hair, and the first to appear in colour – and they’re grouped together in 1973, as denoted by the phone. The same year that ‘The Three Doctors’ was broadcast – although it began its initial transmission just before Christmas 1972. Coincidence? Of course not. You know me too well by now, surely?

But there’s more. You will also note that the cobweb-encrusted hand in the lower left portion of the shot is wearing a wedding ring: an object of great significance to the Doctor, as you’ll recall from the closing scenes of ‘Twice Upon A Time’. It’s a ring that signifies River Song. And if you count subsequent Doctors from those fingers, moving from the left (so as to make the whole thing clockwise) and starting with the Fourth, you’ll note that the ring finger is married (pun semi-intended) with Colin Baker, who travelled with River in The Eye of the Storm (in which they encountered Daniel Defoe) and World Enough and Time. Both were released on Christmas Day 2016, marking forty four years since ‘The Three Doctors’ – a number which CLEARLY AND UNAMBIGUOUSLY refers to the Type 44 TARDIS that the Doctor encounters in Harvest of Time. That’s the Third Doctor, folks, in case you were having trouble keeping up. You know, the one marked by the phone? Is it finally time for Sean Bean to step into the shoes of his father for another River Song series?

I mean, you read it here first, and we’ll keep you all updated as and when we have further news – but Christmas has even more significance for us today, and in order to understand why we really must move on and look at this map. I love a map. They’re layered with detail, and this one is no exception.

This is, as far as I can see, an actual map of Sheffield, because it tallies with the motorway junctions – more on that in a moment. In the episode, the Doctor grabs a thick black marker and swiftly draws an intricate fractal pattern that centres the action on a posh hotel that’s actually just outside Newport. Myself, I’d rather get the highlighters out. Because a curious thing happens when you join the dots using the right colours.

Still not with me? How about we do a little colouring in? (Please excuse the blots in this next one; my hand slipped.)

Viewed in this way, the seemingly random pattern of dots CLEARLY becomes a red-finned rocket-fish hybrid, blasting off for parts unknown – specifically to the North West, indicating that the TARDIS will be landing in Scotland next year. Could we be about to see a sequel to ‘The Eaters of Light’ that ties in with the star whale from ‘The Beast Below’? Watch this space, folks. Oh, and pardon the pun.

Eagle-eyed readers will have noticed something else: the blue line that protrudes from the ‘eye’ in the middle of the rocket-fish-whale-hybrid. The line is angled in the direction of junction 34 at the nearby M1, just north-west of Sheffield. Right next to this junction is a large green space (and golf club) named Concord Park, which neatly calls to mind ‘Time Flight’, in which Fifth Doctor Peter Davison travelled on Concorde – not to mention the rocket’s OBVIOUS AND ENTIRELY DELIBERATE resemblance to Mr Spoon’s rocket from Button Moon – a programme to which Davison voiced the theme music.

However, Davison is only the link here, and not the end product: we must examine his life within the context of Christmas, as I mentioned above. And Davison’s 1984 Christmas was one of particular upheaval, because it saw the arrival of his daughter, Georgia Moffett – who went on to marry David Tennant, and who was born (you guessed it) on December 25th.

Anyone want to guess how old David Tennant actually was when he made his debut in ‘Parting of the Ways’? That’s right, folks. Thirty-four. I swear, sometimes I surprise even myself.