Have I Got Whos For You (February Made Me Shiver Edition)

This week in Whoville, there’s trouble in paradise.

This is from a film, right? They walk around wearing blindfolds for some reason. Is it like that bit in ‘Flesh and Stone’ where Amy has to navigate the Angels? Can someone enlighten me seeing as I can’t be bothered to Google this afternoon?

Elsewhere, it snowed, so obviously.

I was chatting to Christian Cawley on Twitter. “Having just finished PD’s memoirs,” he said, “Davison, Troughton and Pertwee pushing the snow onto Tom Baker might be more apt.”

“There were so many combinations,” I told him. “It was almost the Brigadier and Jo pushing the snow onto an unsuspecting Pertwee. I like the idea of Capaldi being caught out, but the real reason Baker and Pertwee are up there are simply because they’re the only ones who would balance.”

Still, you can’t keep a good Time Lord down. Not when there’s a big game on. 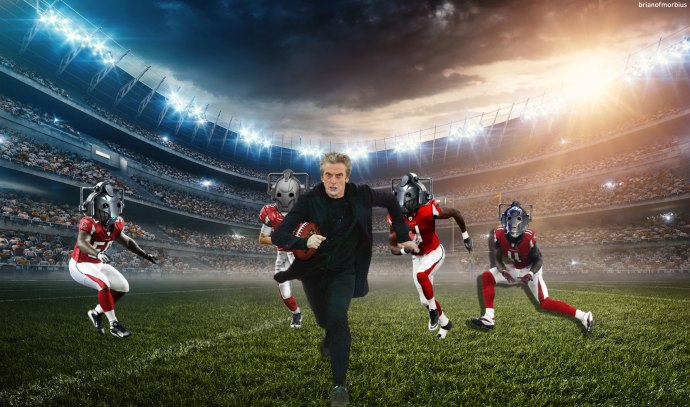 In case you were wondering, most of them are Falcon players. I went for the ones that were already transparent, as I couldn’t be bothered to do any cutting out. I have no idea if this makes any sort of statement on the quality of the game or the people that play it. I don’t even know what I’m looking at. I played an early John Madden game on the Sega Mega Drive but I never really got to grips with it; the whole thing seemed awfully stop-and-start. You will notice the Doctor is the only one not wearing any padding, and there’s a hint of sneering culture wars at play here: my feelings on American Football (or, as they call it, Football) aren’t exactly well-documented, except to say that over here we call it rugby. And we don’t use helmets.

But by the time you read this, of course, the Super Bowl will be a distant memory, because it’s all about Chinese New Year. Only with the Doctor, of course, it never goes to plan.