Review: Fugitive of the Judoon

Warning: many spoilers below. Read at your peril.

There are some episodes of Doctor Who that, when you examine them under a bright light, actually aren’t terribly good. ‘Extremis’ is perhaps the most obvious contemporary example. ‘A Good Man Goes To War’ is another. ‘Utopia’ a third. None of these stories is particularly memorable, in the grand scheme of things. ‘Utopia’ sees the Doctor and Martha (with an old friend in tow) explore the end of the universe while being pursued by the carnivorous remnants of what used to be humanity. ‘A Good Man Goes To War’ assembles a ragtag bunch of waifs and strays and pits them against a silent religious order, in more than one sense of the word. ‘Extremis’ marks the beginning of the Monk trilogy – the low point for series 10 – in a story that is memorable solely because it pulls the rug from under our feet in its closing minutes. (Well, that and the scene with the Pope. That was quite funny.)

But they’re all stories we remember because Things Happened. ‘Fugitive of the Judoon’ was event television. There was absolutely nothing special about it, in terms of the story it endeavoured to tell; it’s certain key moments that stand out. It starts innocently enough. Bereft and miserable, the Doctor is finally distracted from her hours of TARDIS console vigil by an alert from Gloucester: the Judoon have landed outside a cafe, and are in the process of throwing their monosyllabic weight around while they search for a dangerous fugitive. They’re still inflexible and brutal, and the Doctor is keen to intercede before things get too nasty – and intercede she does, although the can of worms she opens as a result is dark, slimy and full of entrails…look, basically it’s a complete dog’s breakfast. She should never have let them talk to Yas.

At first, it seems the Judoon are after an elusive, perenially nervous Stroud native called Lee (Game On‘s Neil Stuke, looking jumpy and perpetually hungover), nice enough but clearly hiding something. Lee is married to Ruth (Jo Martin, recently decorating the boardroom at Holby City), who is celebrating her birthday by handing out flyers for city tours that no one is booking – at least until the Judoon show up, all leather and pointed helmets, stomping through houses and cathedrals and killing anyone who gets in their way, while Whittaker makes awkward jokes about canals. That the fugitive turns out to be Ruth is no real surprise; that Lee meets an early demise twenty minutes in is predictable television; that Ruth is harbouring a buried past and hidden skills is more or less what everyone expected.

That she turns out to be the Doctor, of course, is something of a twist.

In a way, you have to hand it to Chibnall (the script is Patel’s, but this idea was almost certainly not) for actually surprising his audience. The buzzing about altered backstories has been an omnirumour since late 2018, but it wasn’t until last night that it appeared to actually have legs, and its unveiling was reasonably spectactular, Whittaker digging in the dirt for a buried TARDIS while Martin smashes the glass panel inside a lighthouse (the only thing that could have upped the symbolism levels would have been to make it a ceiling) and before changing her clothes. So catastrophic is the anticipated fallout from a move like this it’s tempting to disengage yourself from the fandom entirely: suffice it to say the decision to insert (or at least appear to insert) an earlier incarnation, with all that insinuates, and then cast a black woman in the role was not only a bold move but also an extremely savvy piece of trolling from the chief writer. Even if it’s not up there with ‘The Name of the Doctor’ – in terms of reveals, it’s more of a ‘Death In Heaven’ moment – it is, at least, guaranteed to get the internet talking about Doctor Who in a way that no one has for quite some time. I’d imagine it was a long night for bowlestrek.

At moments like these the temptation to shout “Bollocks!” (as I did during ‘Orphan 55’) is stronger than ever. But any doubts that Martin really is the Doctor (or at least a Doctor of sorts) are instantly dispelled by the synchronised, ‘Midnight’-esque conversation that follows – along with certain behavioural aspects that seem fairly authentic, albeit at the Colin Baker end of the scale. Acting is a big part of it: Martin’s demeanour change from human to Time Lord is powerful but understated; two halves of the same character, pompous and serious while Whittaker looks increasingly confused and out of her depth. It could still turn out to be an elaborate ruse, but honestly I’m not convinced that this current production team are capable of that sort of feint: this feels more like the sort of game-changing reveal that prompts an explosion of fan theory. She’s the Doctor from a parallel universe. A future Doctor with memory loss. A hidden incarnation sandwiched between Troughton and Pertwee. A buried secret past, Chibnall’s rumoured ‘Thirteen Previous’ cycle coming to fruition. Pick one.

It makes it a difficult episode to review. The story itself is bland and inconsequential, serving solely to advance the series arc: more than anything, ‘Fugitive’ feels not so much like the first part of a two-part story but a filler episode that we’ll revisit in a month or two, or perhaps even next year if the rumours have any substance. The TARDIS fam have next to nothing to do this week, to the extent that they’re removed from the narrative entirely by the most unexpected of guest stars, materialising in a gloomy spacecraft in the company of Captain Jack Harkness. Older, a little grizzled around the jaw but still as flirtatious as ever, Barrowman wastes no time in snogging Graham and complimenting him on his temples before evading a barrage of laser fire from the unseen monsters who want their ship back. As much fun as it is, the inconvenient truth is that Jack’s cameo serves absolutely no purpose, other than to have the fans squealing and jumping out of their seats, something I’ll admit I did. He’s there to deliver a cryptic message to the Doctor (disappointingly, the two never meet – perhaps they’re saving that for later), but surely he could have sent an email or something? On the other hand it’s lovely to see him, and it says something about the pace of an episode when a cameo from a long-departed guest actor is one of the least interesting things about it.

The other inconenient truth is that, despite its good intentions, ‘Fugitive’ wasn’t exactly a rug sweeper. It feels, more than anything, that those days are over: that the two-way feedback now supposedly deemed essential to the production process has rendered this a series of games and one-upmanships; television reduced to a series of “Gotcha!” moments. For all its jaw-dropping revelations (and there were several) it’s hard not to feel ever so slightly cheated; that this was an event, rather than anything of any substance. Moreover it was an event inserted purely for shock value, a cynical headline-grab in the manner of Moffat’s decision to tinker with the numbering (something no amount of garbage about writer’s block can ever really justify). Doctor Who isn’t produced in a vacuum, and while Whittaker maintains she doesn’t read the papers it should be fairly self-evident by now that Chibnall does. It is impossible not to conclude that this decision was made to deliberately upset certain people. And while I don’t object to big changes, as long as they work, and while I’d be happy to see Martin again on the strength of her performance this week, I’m not sure how I feel about the the BBC poking the fandom with a stick. Although let’s face it, that’s something the Doctor does particularly well. 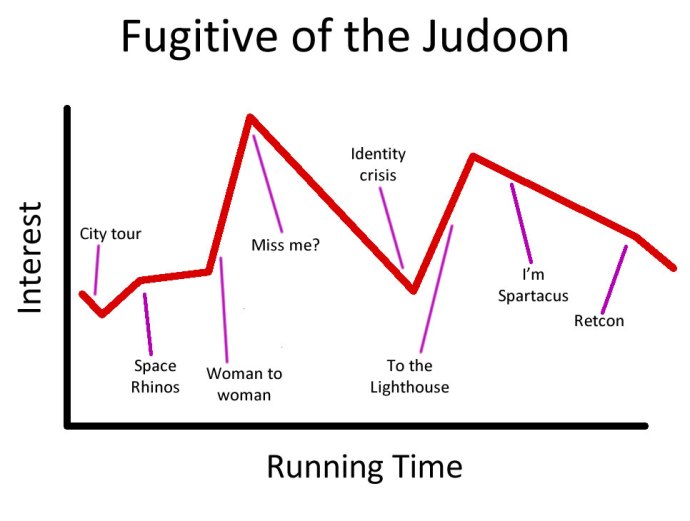