After several months of catch-up, we are – almost – at the point where the videos are being blogged in the same season (if not quite the same month) that they were originally produced. That probably means you’ll see fewer of them on here for a bit, which is not a bad thing as we’re all a bit thick with series 12 stuff at the moment – although if you’re tired of reading about heavy-handed social commentary and politics then this may come as a welcome relief. Except one of today’s batch features the Prime Minister, so maybe not.

Shall we crack on, then?

September seems an age ago now, so let me play the magic harp sting that signals the beginnings of a flashback: it was one of those things that was trending, briefly, for no reason other than it was a Sunday and we were bored. “Banner might be bound in manacles,” Boris told the Mail, “but when provoked he would explode out of them. Hulk always escaped, no matter how tightly bound in he seemed to be – and that is the case for this country.”

He’s missed the point, but I’m not interested in deconstructing his argument; I will leave that to the likes of Mark Ruffalo, who had plenty to say. I just thought it would be fun to take some footage of Boris and score it to the Lonely Man theme from the 1970s Incredible Hulk TV series – you know, the moment at the end of every episode where Bill Bixby hoisted a small knapsack over his shoulder (presumably he’d just buy a new shirt in the next town) and then walk off down a tree-lined road, thumbing for a lift that never came, while the world’s most miserable piano music tinkled away in the background. That’s Boris, here. It doesn’t quite come off, but it was fun to throw together.

Here’s something I’ve never told anybody: if you watch our wedding video, when I’m saying my vows, I am nodding my head up and down like a dog in the back of a car. I can’t remember why I was doing it; it was just the heady mix of nerves and passion and the maelstrom of chemicals that surge through you when you get married to someone you love. Emily calls it my Churchill performance, and it has become one of those running jokes that is amusing to you and you alone. I don’t even know why I’m writing about it.

Anyway. October last year – a few days before our anniversary, as it happens – and Churchill Car Insurance unveil a new advertising campaign, in which their iconic bulldog – now given a fresh lick of paint – is seen skateboarding along through a bustling urban locale while some pleasant ambient muzak drifts along in the background. It’s all very nice and calm and done rather well, but I really felt like they missed a trick by not using ‘The Power of Love’. So I stuck it in, and I can’t help thinking it’s an improvement.

OK, this one sort of exploded a bit.

Back in early autumn – it may have even been the dying embers of summer, depending on your geographical perspective – we got wind of an upcoming charity compilation for Children In Need, with various stars of stage and screen set to lend their vocal talents to a covers album. Said list included Adrian Lester, Jim Broadbent and Olivia Coleman, who is in everything. But the biggest news was Jodie Whittaker, who was covering ‘Yellow’. You can say what you like about Coldplay, who disappeared completely up their own arses after they became the backing music for just about every entertainment montage or charity video that TV could throw at us, but Parachutes is a great album, and ‘Yellow’ is a wonderful three minutes of unpretentious pop. Noticable from the preview footage was that Whittaker was opting to perform in her native accent, leading to various remarks (including one or two from me) suggesting that she’d actually be singing “…and it were all yeller”.

The album itself is quite good – Helena Bohnham Carter smashes ‘Both Sides Now’, Tennant supplies a servicable ‘Sunshine on Leith’ (although is there ever any point to a Proclaimers song that isn’t sung by the Proclaimers?) and the whole cast unites for a chirpy cover of ‘It Must Be Love’. But it’s Whittaker we want to focus on here, if only because setting her rather heartfelt vocal (delivered, as it turned out, while she was looking at a picture of her deceased nephew, to whom the song is silently dedicated) to a sequence of series 11 images really was a bit of a no-brainer. Why would you not?

I wasn’t the first. But publishing it on the anniversary of ‘The Woman Who Fell To Earth’ turned out to be a helpful move; people were, I think, a little more kind as a result. You inevitably get a bit of trolling when you launch something like this – I had to block several people from my YouTube channel (hello Michael McGrath, are you still out there waving your toxic micropenis?), but I left as many negative comments up there as possible, which annoyed me less than it usually does given that the vast majority of them seemed to be focussing on the song, with ‘autotuned’ being the prevailing sentiment among her critics. Other people liked it. “You may have single-handedly revived the fortunes of Doctor Who” read one bit of feedback that landed on my timeline. Well, I really wouldn’t go that far. But I do know that Mandip Gill liked it, and that’s good enough.

Have I Got Whos For You (Marvel Edition)

We open with a plummeting coyote.

It’s all academic. To give you some idea of how far behind we are, I haven’t even seen The Winter Soldier yet. I know roughly what happens in each movie – that Ultron probably gets shot into space, that Ragnarok was a hotbed of comedy, and that at the end of Infinity War Thanos wipes out half the universe (along with the identities of at least some of the casualties). I’m sure it’ll all be fixed in Endgame, the way death invariably is in the Marvel universe. We did manage to squeeze in Doctor Strange (verdict: swooshy and fun, although I can’t get used to Cumberbatch with that accent), as well as Deadpool and the first Guardians movie, both of whom were absolutely ridiculous, in a good way. I am Groot? I am Groot.

We’ll get to them – my shelf is full of unwatched Blu-Rays – but they’re so bloody long. Emily is an early-to-bed person as a general principle, and once we’ve got the kids in bed (or at least out of the way) it’s usually gone half past eight and that’s too long even for the likes of Civil War, never mind the three hour magnum opus that wraps everything up. And no, I’m not watching them with the kids. No, not even as a special treat. Seriously, they natter all the way through. It’s incredibly irritating. They can ruin it for themselves; just not for me. Call me fussy, but I’d kind of like to enjoy Civil War without having to explain the plot to everyone because none of them were listening during the exposition.

Most of the memes in here are of the Time Lord variety, but I do occasionally dabble with Marvel; sometimes there’s a Doctor Who connection, usually there isn’t. And given that absolutely everyone is talking about Endgame, with its midnight showings, tightly-concealed plot and the promise that it will make you cry for the entire running time (including the ads) then it really is time I stuck them up here, simply so that they’re on the web. Some (the Spider-Man photo) are very old. Others – the Tree Fu Tom one, which came about after a visit to CBeebies Land last week – turned up in my head quite recently. Excelsior!

#1. To begin, Thor runs into trouble (quite literally) out on the Rainbow Bridge.

#2. Credit to Jon Oliver (not to be confused with John Oliver) for the text here. I just gave it life.

#3. Marvel does…Pinter. This is Spider-Man: The Homecoming.

#8. I have actually done this.

Is Capaldi yelling at Tennant, or is Tennant yelling at Capaldi? You decide.

Somebody give Jeremy Clarkson a steak. Quickly. 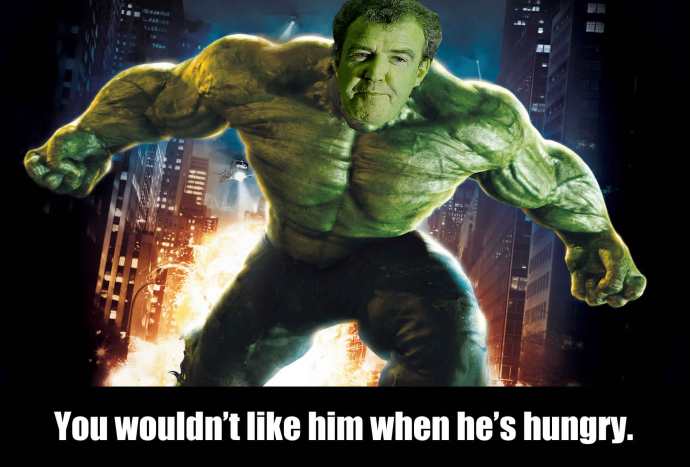 The idea of producing a Hulk version was entirely Gareth’s idea, as was “You wouldn’t like him when he’s hungry”.

A few days later I was in a charity shop in Reading, and found myself playing around with the displays. I confess I am quite pleased with this. 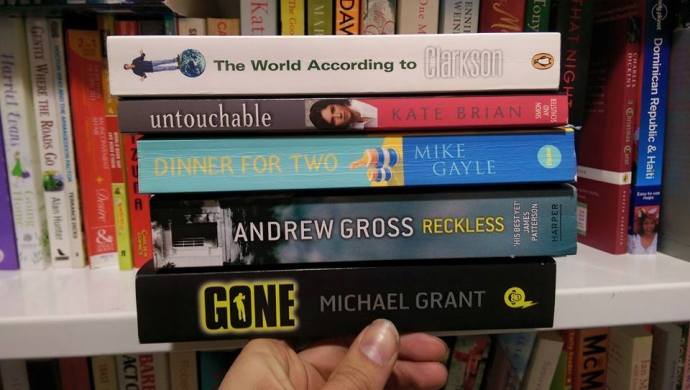 Hey, we don’t always have to talk about Doctor Who…