Posts Tagged With: meet the kittens

First of all, this.

I mean, I have no idea what’s going on here. I assume it’s some sort of satanic ritual before the Japanese airing of Dinopaws (or ダイナパウズ）たいそう, as they call it over there). The shouted names, the manic dancing…it’s obviously supposed to conjure up the spirit of long-dead reptiles. All that’s needed is a vial of incense and a couple of sacrificial chickens. I checked the ‘up next’ suggestions and there are a bunch of these, which I opted not to see because there’s only so much excitement you can take in one day.

Whovians amongst you, of course, will have figured out that the chap on the right does appear for some reason to be wearing the Sixth Doctor’s coat. Cosplay suggestions for his grinning companion are more than welcome; please leave them in the usual place.

Dinopaws is a programme we talk about quite a bit here at Brian of Morbius, mostly because it’s one of the most endearing and imaginative shows to hit CBeebies in years. It’s earned its share of bad press, of course, largely because of the language component: Gwen and Bob are still playing with the concept of language (Tony appears to have made up his own, and it’s strangely reminiscent of the sacred words held by the Knights Who Say / Who Until Recently Said ‘Ni’.) This leads to all manner of complaints about made-up words and language development delays from parents with nothing much else in their lives. Children learn language from the adults they interact with; anyone who is picking up permanent habits from TV is watching too much of it. To conclude that it’s the BBC’s responsibility to educate our children is to completely pass the parenting buck. Such stupidity also ignores the work of Lewis Carroll, Ogden Nash and Spike Milligan, but let’s not go over all that again.

There’s a darker component to Dinopaws, of course, when it comes to feedback, and that’s the inevitability of the creatures’ eventual demise at the hands of a massive meteor / comet / crashed spaceship containing an impetuous maths prodigy. Cue much doom and gloom across the Twittersphere from parents who find themselves unable to truly enjoy the programme because of the looming threat of a total extinction event. Except that’s not the way it works, because (as we keep saying) Dinopaws isn’t set on Earth. It’s set on another planet, called Marge, with all sorts of other things going on. Not convinced? Look at the sky! The sky is all over the place! That’s not a Pangean sky!

Look, why stop there? There’s a lack of realism all over the shop. Why not discuss the fact that the theme to Topsy and Tim really ought to contain the words “We can be / Anything / But only within the confines of particular gender stereotypes”?. (That one’s mine, so if you use it, copyright Donna Noble.) Or the happy-go-lucky Petal, Dash, Digger and Gobo, who spend their days in the barn in blissfully doomed contentment. 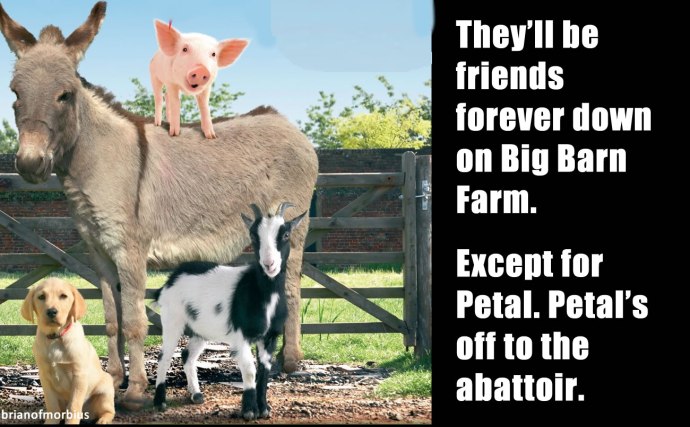 You’re not supposed to tell children about this, of course, which is presumably why a recent episode of Meet The Kittens – in which a mother cat brought back a dead rabbit for her babies – caused such a stir. There’s no blood in the scene, but they do spend a good deal of time filming the dead animal as it’s dragged across the staircase, and when the episode was re-shown this week the CBeebies Facebook page saw more than a few complaints. “Pretty discusted of seeing what i just saw,” wrote one user. “It upset my children as they love rabbits and i think it would upset other children yes show kittens with it mother but not a cat what has caught it prey and taking it to its kittens to feast on i do not want my children watching that kind of stuff on cbeebies i think u need to say sorry on air to all the viewers as that was unexceptable.”

That was one of the less vitriolic remarks. Others got very upset. One person, in particular, saw it as an opportunity to describe every parent who approved as one of the most disgusting people she’d ever met, and when she was called out on this hyperbole she became violently defensive. In the end she opted to leave the conversation because the longer it went on, the more people were not only disagreeing with her but also calling her out for her behaviour and somewhat judgemental tone, which she took very personally. How dare they, she seemed to be suggesting, how dare they have the audacity to tell her she was wrong when she was simply stating what she felt?

Herein lies the problem with most online debate. The moment a remark leaves your head and makes its way to a public forum, it’s no longer your property. It can be retweeted, re-posted, screen-grabbed and ripped to shreds, in a group or on someone’s profile or even in the pages of an online newspaper. There’s a right and a wrong way of doing this. I always make the point of looking at public profiles of anyone I’m about to have an argument with; it enables me to know whether I ought to make allowances or concessions, and it’s worth it even when you get called a ‘weirdo’ or a ‘stalker’. If you want to avoid the potential repercussions for inflammatory viewpoints then for God’s sake keep them private. Facebook is not private. Shouting on a Facebook forum is the metaphorical equivalent of standing up in a Q&A session and talking bollocks; no one will necessarily stop you at first, but you’ll reap what you sow when people start to answer back.

“But it’s MY OPINION,” comes the whiny response from Chantelle or Scott or Claire (or, worst of all, Leanne Logan’smummy). To which my standard response is “So what?”. This so-called right to an opinion is bullshit. It’s something they teach children now before they’re really ready for the responsibility of credible sources and elementary logic (and I know this, having seen it first hand) and we’re now experiencing the fallout on social media. If I told you that the sky was green and that it was my opinion, you’d still tell me I was wrong, and you’d be correct to do so. If I told you that you were a lousy footballer (or, more to the point, a bad parent) and my opinions contained not a shred of credibility you’d argue the toss, and once again you’d be correct. I post all manner of crap on here about Doctor Who and I’m ready to defend every single word of it when challenged. I would expect the same of any rational adult. I’ll routinely tell people this. And if I consider them semi-literate, I’ll point them towards this article here, which sums up my views on things better than I ever could. 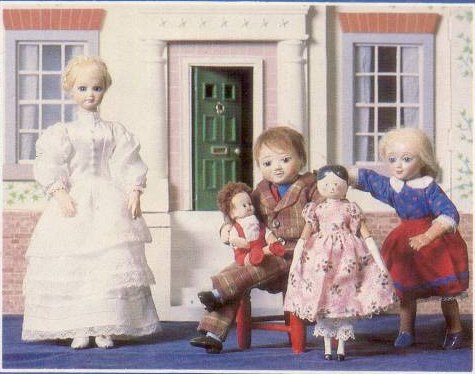 But listen. Listen carefully. When I was just shy of six years old, I saw an Oliver Postgate programme called Tottie: Story of a Doll’s House. It featured a glacially beautiful, morally twisted doll called March Payne who – in her endeavours to become the sole object of her owner’s affection – started a house fire with paraffin that resulted in the death of one of the other dolls. There was no detail, but it frightened me. And I got over it. When I was four, I saw a public information film in which a young girl ran out into the road and got hit by a car. It terrified me. From that day to this I have been careful when I cross the street, and I keep the gate shut.

Also when I was four, I saw the final episode of ‘Earthshock’, in which Adric dies at the hands of the Cybermen and the credits rolled in silence over a view of his shattered badge. It upset me. When I was seven, I saw an episode of Ulysses 31 in which the characters in suspended animation aged almost to death. It wasn’t the sort of thing that would normally frighten people but it gave me nightmares. When I was eight or nine there was a programme called Knightmare which featured dissolving flesh and cracking skulls. I can still see those images in my head if I concentrate, but it doesn’t matter. When I was nine or ten, there was an ITV show called Wizbit, and don’t get me started on that.

Children bounce back. I bounced back. In our haste to protect our loved ones from the monsters, we’ve forgotten that kid’s TV used to be absolutely horrible. That’s part of being young. You get over it. Memories are short and young minds are durable. That’s why I introduced mine to Doctor Who as soon as I felt they were ready, and why I watch them squirm at the gore with a curious delight. Up to a given point, it builds character. Discussing death builds character. Joshua has never forgotten the face-melting in Raiders of the Lost Ark but it hasn’t warped him psychologically. Part of this, I am convinced, stems from the time he watched our cat die when he was two years old. He accepts it, in a way that Logan-son-of-Leanne never could, because she’d rather wait “until he’s ready”, innit. That’s entirely her choice, but don’t call me out for doing it differently, and don’t accuse the BBC of negligence when you know nothing of its practices. This is a channel that routinely censors fairy tales to suit its intended audience. They’re not beyond reproach, but they know what they’re doing.

Alas, none of this matters when you’re arguing on Facebook. I shouldn’t be surprised. We’re in a world where university courses are censored because of complaints from students who take exception to ‘offensive content’. I’m not opposed to political correctness. I don’t advocate racial or gender stereotyping. I understand why they no longer broadcast It Ain’t Half Hot Mum. But I do wonder when we started to lose our backbone. More to the point, I wonder what these whining grown-ups with too much free time actually want from these emotive, expletive-ridden rants. What would it take to redress the balance? What would it take to make the act of a dead rabbit acceptable? 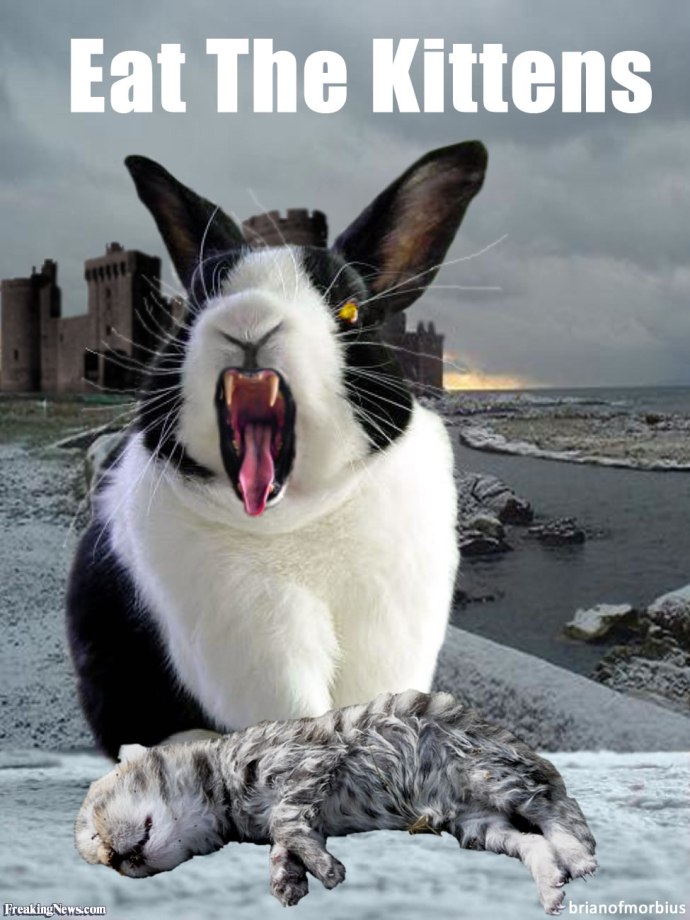 No, you really didn’t see this. Move along.