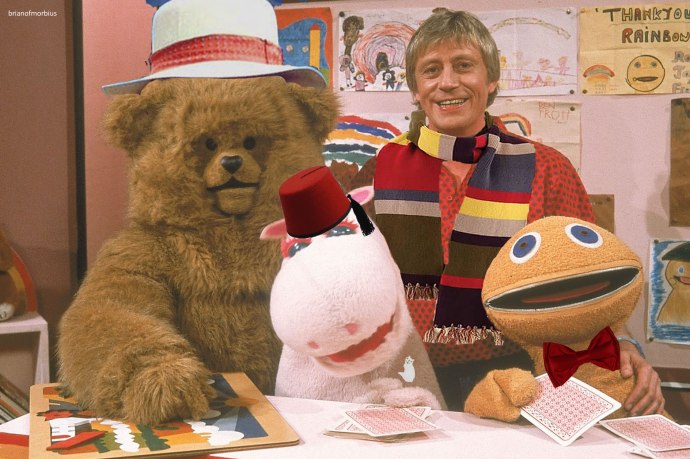 Today, boys and girls, you have a choice. You can read this through, or you can skip to the bottom. That’s where the video is. I will not hold it against you, and I’ll never know you did it. Your time is precious. But do, at least, spare five minutes to watch the Thing At The End, because that’s the whole point.

Somewhere in the home counties – I’m thinking Surrey, although it’s never clear – in a cheerfully painted house, a fluffy gay hippo is carefully stacking blocks. To his left, there is a weird orange thing that may or may not be extraterrestrial, doing a puzzle. There is a piece missing: in his frustration, he chucks the box in the direction of the hippo, upsetting his tower. “Ooh, Zippy!” complains the hippo, rife with melodrama. “Zat’s very naughty! Now I’ve got to start again!”

“Oh, well, never mind George,” says the alien. “You can always make another one.”

Stage right, there is a large brown bear reading a comic. “Oh, Zippy,” he sighs. “You are careless.”

“Yes, well, it’s not my fault!” says the alien. “He shouldn’t have been building right next to my jigsaw!”

Their greying foster carer – all sensible shirts and white trainers – walks in, carrying a basket of washing that is inexplicably full given that he’s the only person in the house who wears any clothes. Scenes like this no longer astound or surprise him the way they once did: he’s watched every episode of The Dumping Ground and accepts most of his job is firefighting the squabbles and arguments his young charges have daily. He suspects the alien may have ADHD. He has caught the bear rewiring the electrics once or twice and has asked him not to. The hippo is constantly put upon by his would-be siblings, and the people down the road are always holding impromptu glee clubs in his front room. This, he reflects, was not how he saw his life going when he signed up for this gig.

When we were children, Rainbow was a part of the furniture. It had been around so long that no one gave its murky origins a second thought. There were all manner of questions about the setup in the house – who were these strange anthropomorphic characters and why were they living with this middle-aged storyteller? What did they do for money? And are the frequent fourth wall breaks some sort of indication that they’re in some sort of kids’ version of Big Brother, mercifully without the sex? But no one really asked. It was just something we accepted. It was, like Doctor Who, more about the situation, and the hijinks that ensued, than anything that might have led to them. 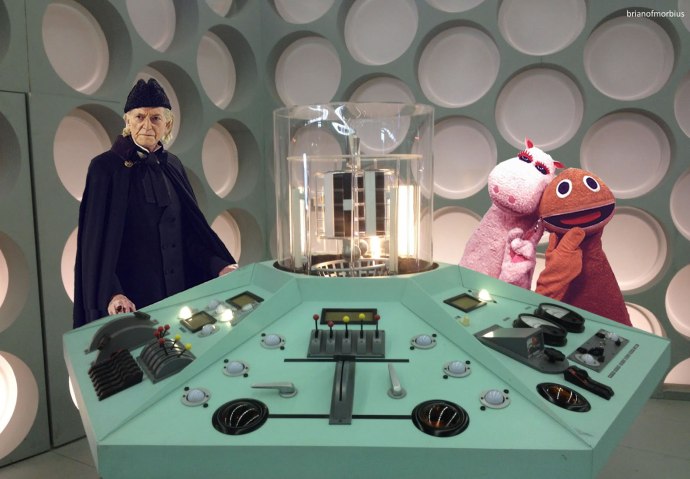 It’s strange when you reflect upon how much things have changed. I often read comments on the CBeebies Facebook page about The Tweenies, usually complaining about something obnoxious that Bella is doing. It is inconceivable that a show like that would be made today. Everyone spends all their time arguing. The characters are real, but they’re not a good influence, and even though their behaviour usually results in consequences and discipline, that’s lost on today’s thou-shalt-parent-my-children-for-me audience. While it’s hard to pinpoint precisely where it happened, somewhere along the line we lost the concept of dramatic irony.

There was – I swear I’m not making this up – an episode of Rainbow where Rod, Jane and Freddy sang a song that went “A flying saucer / In our garden / It must have come from outer space…”. Whereupon Zippy poked his head out of the window and offered them a trip to the stars, which they gleefully accepted, finishing the song along the way. It was, to my mind, the best origin story for Zippy that we’ve ever had. There is no other explanation for a creature with a zip sewn into its mouth, other than one that evolved on a planet where it’s an essential survival feature. Perhaps he was expelled from his home world for being thoroughly obnoxious – it would explain why ‘cousin’ Zippo is so mind-numbingly placid, at least until that later episode where he develops a bad American accent and starts talking about crisps.

Little moments like this are integral to our understanding of Rainbow. There are episodes where Geoffrey randomly ‘has to go out’. We never know where he goes (unless he returns with something plot-related) or why. Sessions at the dole office immediately spring to mind. So too do images of Geoffrey attending a drug deal or hiring himself out as a gigolo. It all depends on the mood I’m in. So you can understand why I’d latch onto the image of Zippy emerging from a wrecked spacecraft and setting up home with a bear and a hippo, which is to all intents and purposes what the song implies. (It also implies, of course, that Rod, Jane and Freddy were actually housed together in some sort of communal living situation, which corroborates many 1980s tabloid rumours.) 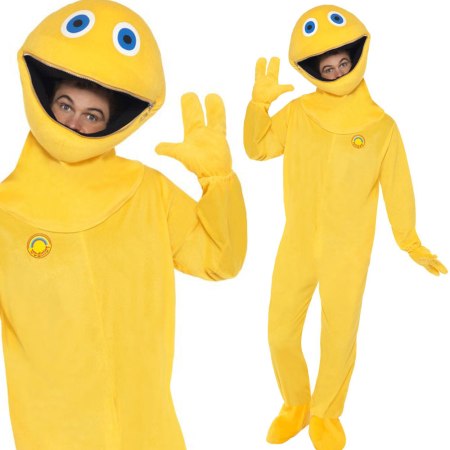 I mean, seriously. What the hell is that? It’s like Zippy ate him. At least he can still breathe, which is presumably a situation that can be quickly altered with the swipe of a zip at the top. Come to think of it why does this have a working zip anyway, given that its sudden closure by an external party is likely to render the occupant airless and blind in an instant? Is this some sort of gimp outfit you use for fetish games? Does Christian Grey have one? It is only marginally less disturbing than the Rainbow comics which hit the stands back in the 1990s, in which every character looks basically normal except for George, who bears the haunted, blank-eyed stare of a hippo possessed. 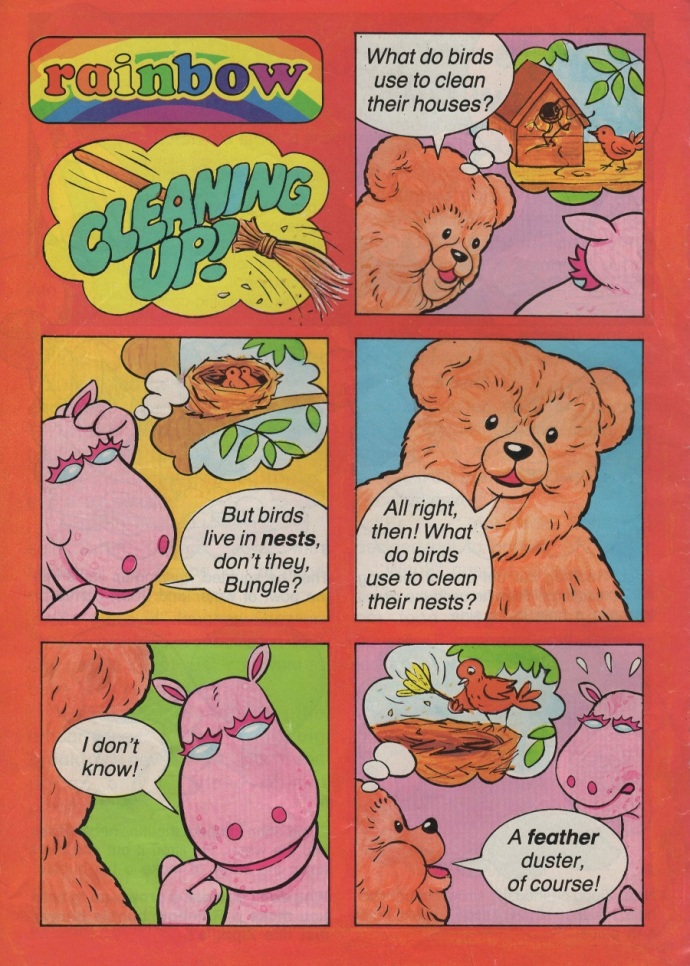 (If you enjoy exploring the seedy underbelly of the animals in the house, you would be well-advised to check out World of Crap, who have devoted pages and pages to rewritten Rainbow comics with amusing captions.)

I’ve dabbled with Rainbow before, of course, in a video that I still quite like, some six years after its creation (not to mention Roy Skelton’s death, which upped the hit count considerably). But Zippy’s only one part of the trio – and while he’s the obvious candidate for voice transposition, that doesn’t mean the others don’t have potential. Except that George is timid and often stumbles over his words, of course, which makes placing him difficult. That left Bungle, who is usually well-spoken, as well as prone to bouts of pomposity. When it came to finding a Doctor Who character for him to replace, there really was only one choice, and that was Omega.

It’s not that I don’t like ‘The Three Doctors’. I think it’s overrated, not to mention structurally problematic – one of those stories that is beloved because it was the first multi-Doctor fusion (and even then, it fails to deliver on its title’s promise). The bickering between Pertwee and Troughton is about the best part of the story – although an unexpected highlight occurs when Benton walks into the TARDIS for the first time, and refuses to state the obvious. The Gel guards are quite fun, but this one is perhaps the epitome of the ‘Stupid Brigadier’ phase, in which U.N.I.T.’s finest devolves into a reactionary simpleton who refuses to accept the evidence of his own eyes.

Then there’s Omega, a villain so melodramatic it’s impossible to see him as a serious threat. Omega’s role in ‘The Three Doctors’ is to shout. In ‘Arc of Infinity’, it’s to shout some more, and then decompose at the edge of a river, just after bonding with a small child over the sight of an organ grinder. In ‘Omega’, the 2003 Big Finish audio drama, his role is to convince you that he’s the Doctor, which he manages with aplomb. But for the most part it’s just a lot of shouting. There must be a reason for all that anger. You almost want Tennant to lean round the door of his chamber, survey Omega’s colossally oversized mask and mutter “Compensating for something?” 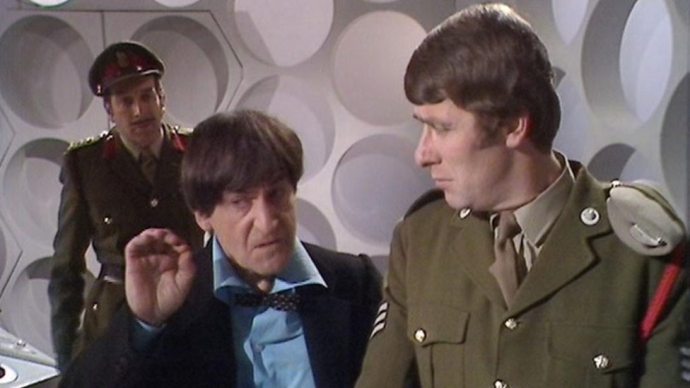 Still, masks are handy. I use masks a lot, simply because it makes the dubbing much easier. And there’s something fun about having a supposedly sinister character rendered ridiculous. In the case of Omega, it only half works. You can make him ridiculous all right; he just isn’t very sinister.

When it came to putting this together, I wanted it to feel as close to an actual episode of Rainbow as possible, so I started with the animations. There are two of them, built up in that slow, frame-by-frame style (the sound effects, by the way, are all ripped directly from the show). Originally it was just going to be K-9, but I put the other one in just for the heck of it – the same might be said for the Rod, Jane and Freddy song that shows up later, although that’s partly the silliness of Pertwee’s slow motion fight with Omega.

The biggest problem was Bungle’s voice, which is less consistent than you imagine (unlike Zippy, who always sounds like Zippy). It’s perhaps most obvious in the opening scene, in which the changes are obvious. This being a Classic episode, I didn’t have the luxury of score-free dialogue, which meant dealing with ambience and the occasional sting from Dudley Simpson (who recently turned 95, if you want another entry to your list of Entertainment Veterans You Hadn’t Realised Weren’t Dead Yet). As a result it’s rather rough around the edges, and I almost like it that way.

Oh, and make sure you watch to the end…