Posts Tagged With: the impossible astronaut

Ah, Steven Moffat. Now there was a man who loved teasing his audience. It was never enough just to put a twist in; his goal, played out with nigh-on obsessive abandon, was the trail of breadcrumbs. Whether it’s Sherlock surviving his fall from the roof, the true identity of Ms Utterson from Jekyll, or what was really in the Doctor’s room in that creepy hotel, it wasn’t genuine Moffat without a puzzle for everyone to solve. It’s a far cry from the days when Doctor Who was aired once and then had to be revisited via Target novels because no one had a video recorder and in any case the BBC had already wiped the tapes. Repeat viewing is not only encouraged, it’s practically mandatory, along with all the bells and whistles of online discussion, dissection and deconstruction.

Still, Moffat’s gone now, so we can’t do that anymore, right? Wrong!

If you’re new here, you won’t know that I spend much of my time during series broadcasts going back through last week’s episodes searching them for things that will come back to haunt us later. Because as everyone in the Doctor Who production offices knows, there is NO SUCH THING as an accident. Every sign, every prop, every seemingly inconsequential bit of detail – from the shape of buildings to the seemingly random use of filming locations – is a potentially VITAL CLUE that gives us CLEAR AND SIGNIFICANT FORESHADOWING for events later in the series.

And guess what? Chibnall has apparently inherited Moffat’s clue fixation. Because when I went back through ‘The Woman Who Fell To Earth’ I found a whole bunch of stuff – and today, dearest reader, I bring it to you, served up with a salad garnish and a complimentary Americano. Come with us now as we explore a world of signs and wonders that will LITERALLY make your head explode.

We start on a train. 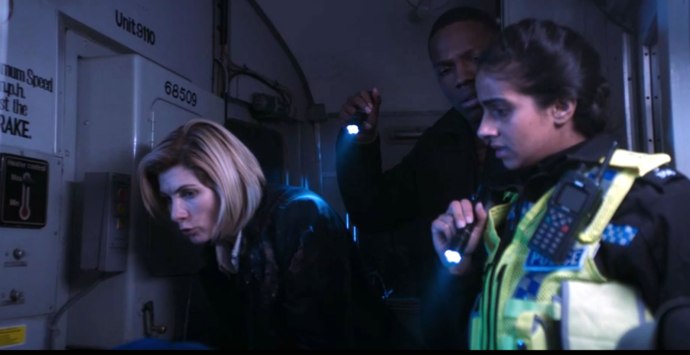 Observe the two numbers by the wall panel – one directly above Jodie Whittaker’s head, one at the upper left of the screen. We’ll get to that one in a moment, but let’s look at 68509 first. It is – as if you hadn’t guessed – a reference to the zip code for Lincoln, Nebraska, where the TARDIS crew are set to land in an episode from Series 12. The Nebraska DHHS is here, which will presumably be a plot point as the Doctor refuses to go anywhere that’s just initials.

Do acronyms count? Because there’s a very prominent one just above – UNIT. And the numbers that follow – 9110, for ease of reference – refer EXPLICITLY AND UNAMBIGUOUSLY to UNIT. Why is this? Well, the first two allude to Marc Platt’s novelisation of ‘Battlefield’, released in print form in July 1991, while the 10 refers to 2010, the year in which The Sarah Jane Adventures broadcast their 2010 crossover episode ‘The Death of the Doctor’, which saw Sarah Jane team up both with the Eleventh Doctor and former member of UNIT staff Jo Grant, as played by Katy Manning. We’ve been asking for another appearance from Jo for years, and it looks like we might finally be about to get our wish.

(As an aside, this is a good time to mention that I finally met Katy Manning last December. She was absolutely lovely, despite me squealing like a fanboy. I have it on good authority that she is like that with everyone.)

But was it a nod to Jo Grant, or was it actually about Matt Smith? Consider this screen grab from Ryan’s YouTube monologue. 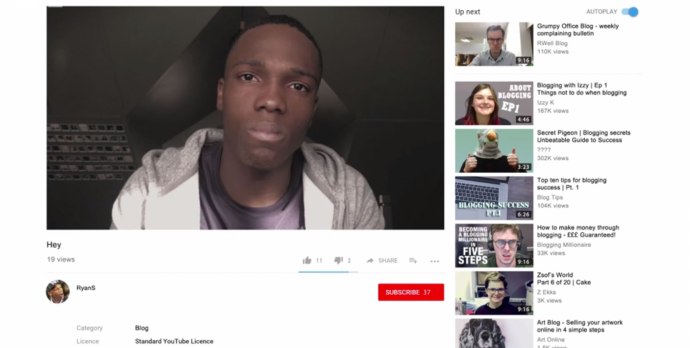 There are a number of things going on here, in a quite literal sense. Ryan’s thumbs up rating sits at Eleven (capitalisation intentional) while his thumbs down is sitting at two. Leaving aside the question of exactly what sort of callous bastard would rank down a video where you were talking about your dead grandmother, we also need to consider what number you get when you add eleven and two.

I will leave it to you, dear reader, to do the math(s).

Ryan’s view count is nineteen, which is a CLEAR AND UNAMBIGUOUS reference to Paul Hardcastle’s iconic song about the Vietnam War, indicating a likely story arc for Series 12. And his subscriber count is sitting pretty at thirty-seven, which is not a random number and certainly NOT A COINCIDENCE. Thirty-seven, you will recall, is the age of Dennis the political peasant in Monty Python and the Holy Grail – a film that introduced us to the delightful Tim the Enchanter. You see? There was a whopping great clue about the identity of this episode’s villain smack bang in the middle of the opening scene, and not ONE of you noticed. Not one. I’m not angry, folks, I’m just disappointed.

A funeral next, because we need to talk about the balloons.

There are sixteen balloons, which allude to the thirteen canonical Doctors, plus John Hurt, Richard Hurndall and David Bradley: in short, sixteen actors who have played the Doctor onscreen in official BBC stories. (There are probably more; don’t tell me about them because it’ll spoil the pattern.) Note that the Eighth Doctor is directly over Bradley Walsh’s head. Also note that Paul McGann’s Holby City storyline seems to be drawing to a natural close – it may have wrapped up by the time you read this and it may even have wrapped already, as I’m writing it. We’re two episodes behind so please don’t spoil it for me.

Additionally, notice the colour scheme. There are three: 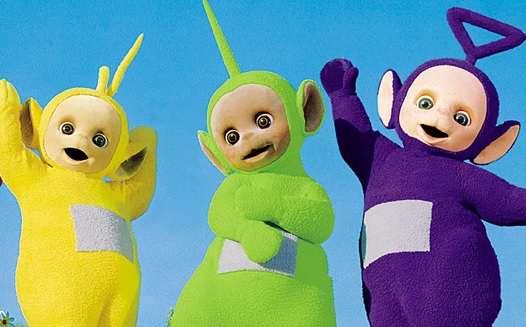 Never mind the subtle but CLEAR-CUT indication that Lalla Ward will soon be back as Romana – has anyone else noticed that there’s one missing? The short, scooter-riding one? The one who shares her name with a famous author? 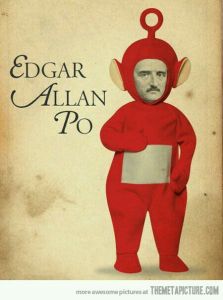 There are a number of episode titles we could mash here, such as The Tell-Tale Hearts, or The Satan Pit and the Pendulum, or simply The Oblong Box, which doesn’t need any modification. But could the imminent appearance of the great writer himself – a man whom the Doctor has encountered several times before – be any more clear cut? To borrow one of Gareth’s jokes, quoth the raven: “Again again!”

We’ll conclude at the end of the episode, in this scene in the charity shop where the Doctor picks out her outfit.

“But how can you tell it was a charity shop?” some people on Facebook have been whining, to which the answer is “Of course it’s a bloody charity shop”. I mean, look at it. There are books on the shelves and there’s a pile of bric-a-brac near the clothes racks. Yes, the changing room is unusually big. Maybe Cardiff has an obesity problem. Besides, where else are you going to find that sort of mismatched ensemble, other than in the dressing up box at a local children’s centre?

I mentioned this to Emily, who said “Well, of course it’s a charity shop. I can just picture her going through those t-shirts. ‘Ooh, look, this one says Sarah-Jane Smith. That rings a bell’.”

I laughed, and then said “Listen, if Sarah-Jane was still stitching name labels in her clothes in her her mid-twenties, I’m glad the Doctor left her in Aberdeen.”

But I’m sidetracking. Because there’s a reason they went to this particular charity shop (or thrift store, if you’re reading this in the other side of the Atlantic). Where is it? If you’re in Cardiff  you could probably have told me without having to look it up, but I had to do a bit of legwork – a word which in this context means ‘look at Google Maps’. There are plenty of charity shops in Cardiff, but we may narrow it down by using the Domino Pizza emporium on the other side of the street as an anchor.

To cut a long story short, it is this one:

This is loaded with detail. Never mind the fact that there is a phone box RIGHT THERE IN THE MIDDLE OF THE STREET, indicating that not only is the much-anticipated Bill & Ted 3 movie finally out of production hell, but that IT WILL BE A DOCTOR WHO CROSSOVER – never mind all that, have you seen the sign just above the housing association window? You know, the one about landlords? Are we heading back to Bristol? Could David Suchet’s Series 10 character be about to make a sudden, unanticipated return? Well, it’s no longer anticipated, is it? We called it, right here. Watch this space.

But wait! There’s more. The address for this particular map reference is 202 Cowbridge Road, and in production history we find that story 202 was ‘The End of Time’, a CLEAR AND UNAMBIGUOUS nod to the IMMINENT RETURN of Rassilon, presumably in the Christmas special. Sadly there’s no word on whether he’ll be played by Donald Sumpter, so we may need to look further afield. Anyone got Jeremy Irons’ phone number?

But wait! There’s STILL more. Look across the street.

Let’s ignore the near miss on that sign, shall we? I suspect the owners are very grateful that it’s the U that’s missing, rather than the O. Besides, we’re now in Series 6 territory: Canton referring, of course, to Canton Everett Delaware III, the Doctor’s erstwhile companion during his battle with the Silence, and who has by the present day moved into local radio, producing a couple of hours of disco-themed music on a weekly basis for online radio station NTS, broadcasting from London, Los Angeles, Shanghai and Manchester. Who else saw that coming? I know I didn’t.

But as if this weren’t enough, scroll back up to that first picture again and note the Registered Charity Number on the sign above the Kidney Research window. It’s 252892 – seemingly innocuous, right? Wrong again. Because a curious thing happens if you stick this into the hex box for an RGB colour converter. I know because I did it, and I could scarcely believe the shade that appeared on the display: 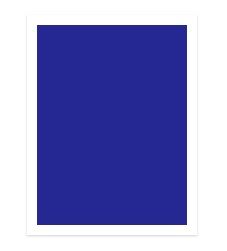 “So anyway, that’s the Silence in action. Scary?”
“A bit, Daddy. I thought they had guns.”
“No, just the lightning. Although that’s probably enough.”
“What did they mean by that thing that the Doctor must never know?”
“Spoilers, sweetie!”
“Oh, fine.”
“Anyway. Perhaps the scariest thing about the Silence, Josh, isn’t the voices or the lightning, it’s that when you look away from them you – hang on a minute, what were we doing?”
“I forgot.”