Somebody give Jeremy Clarkson a steak. Quickly.

The idea of producing a Hulk version was entirely Gareth’s idea, as was “You wouldn’t like him when he’s hungry”.

A few days later I was in a charity shop in Reading, and found myself playing around with the displays. I confess I am quite pleased with this.

Hey, we don’t always have to talk about Doctor Who…

I always try and have the coffee on by the time Emily gets back from work, but the other morning, I forgot. So I offered her a cold drink instead. She gave me a black eye. Then someone pointed out that she has more Facebook friends than I do and therefore I shouldn’t complain.

Put like that, it’s ludicrous, isn’t it? But what happened with the Top Gear host the other week isn’t really so different. There’s a lot of rank stupidity when it comes to media exposure these days. We live empty, leisure-filled lives where overreacting has become par for the course, and getting offended comes naturally when everything profound that’s said is usually said online – or on video, where it can be embedded online – to be dissected, retweeted, screengrabbed and analysed to death. The slightest complaint is a viral headline. So it’s easy to think that the news that Jeremy Clarkson had punched a producer was just another in a long line of “Oh, that Clarkson, he’s such a wag” stories by one of the ‘characters’ of BBC TV. We put up with Clarkson because he’s fun, and politically incorrect, and ‘tells it like it is’. (Well, so does Katie Hopkins, I’m informed, and she’s a provocative bitch whose views on mental health alone have made me physically nauseous – despicable if they’re genuine, and colossally unfunny even if they’re meant for pure headline-grabbing sensationalism. I’m not even going to link to them, because, you know, oxygen of publicity.)

But consider this. If a popular but immensely volatile member of your office staff decked one of the marketing heads, and wasn’t disciplined for it because of his exemplary sales record, wouldn’t you feel the teeniest sense of injustice? Wouldn’t you think that perhaps the disciplinary procedure was not quite as well-oiled as the HR department would have you believe? Wouldn’t you say “Hang on a minute, this really isn’t fair? There’s Pete with a broken nose and he has to suffer in silence, while all Bill gets is a slap on the wrists before sloping off down the pub? And this is after the racist joke he cracked the other week? There’s something fishy going on in that boardroom.”

Listen, Tom Baker was notoriously difficult in his final year, but I don’t think even he resorted to laying out the crew, even when Alan Bromly was directing. It’s not a question of putting up with the primadonnas because they bring in the coffers. It’s about having a chain of command. Clarkson’s not untouchable, nor should he be. This is the straw that broke the camel’s back, and the camel has had enough. This will cost the BBC millions and I’m sure they didn’t strangle their golden goose without careful consideration; if they’re guilty of anything it’s that they never trained it to stop pecking. And you know what? Just because you pay your license, you don’t get a say in how they run their organisation. Throwing in a hundred quid a year and then whinging about it in a hundred Daily Mail threads does not make you a shareholder, nor does it give you a democratic right to dictate policy. Clarkson attacked a man for thirty seconds because the hotel had stopped serving hot food, because he’d been in the pub for hours. That’s not a delicately balanced hardworking trouper who’s suffered great misfortune for his art. That’s the hallmark of an obnoxious bully who’s fired up by Dutch courage. Wars have probably been started over less. And as for those who complain about the Jimmy Savile parallels, I’ve never heard such an outrageously misplaced analogy. It’s not even worth telling them how stupid it is.

I stopped reading the comments eventually. I’m not really a grammar snob – at least not online, where I’ve learned that it frequently doesn’t matter – but in this instance there really is a direct correlation between the ability of people to string a coherent and reasoned argument together and their ability to spell. “BOYCOT THE BEEB!” the Facebook comments scream in abusive capitals. “BRING BACK CLARKSON NOW OR WE DONT PAY NO MORE!” You cannot get through to these people. They’ll see what they want to see, and read what they want to read. It’s like the Dwarves at the end of The Last Battle. You can’t always open the eyes of the ignorant and stupid, nor can you consistently educate the naive.

So I have kept my distance. I don’t need the blood pressure. If anything, the whole incident proves that eating meat of any sort just leads to barbarism and that we’d be far better off switching to the sort of vegetarian tree-hugging lifestyle espoused by Clifford Jones in ‘The Green Death’.

Anyway, Jeremy’s out of a job now and word on the street is that ITV, Sky and Channel 4 won’t touch him with a barge pole, so if he needs a new gig… 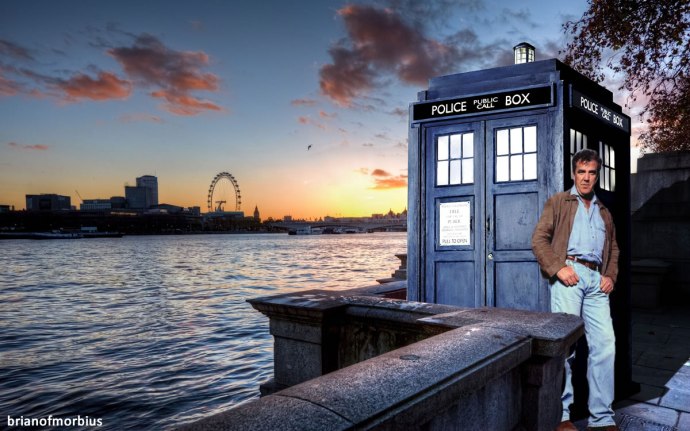