Ah, Papa Louie Pals. How do I love thee, and thy sandbox of delights? Let me count the ways. There are twenty-eight of them in this particular edition, mostly taking the form of Classic (pre-2005) companions. The list is extensive but not necessarily exhaustive (Grace, for example, isn’t featured, but I may save her for an odds and ends feature somewhere down the line). Some of these are better than others; a few of them are so generic they could probably be anyone, but if I tell you who they’re supposed to be, and if you squint, then perhaps you might just about manage to make out the superficial resemblances. Others will be fairly obvious from the get-go. None of them is perfect, but some are quite good. And, of course, if you missed the first part of the companion run, or even the Doctors I did a couple of years back, you’re welcome to go and check out both.

Right! Onwards. First, here are two that didn’t make the cut from the previous batch – Doctor Ruth, as I like to call her, and Sacha Dhawan’s Master. One of them looks just a little happier.

In keeping with the ‘newer characters I haven’t done before now’ theme, here’s Wilf. He’s standing next to Susan, who is wearing her classic stripy ensemble, as seen in ‘An Unearthly Child’ (that’s the final broadcast edition, as opposed to the pilot). Fun fact: she also wore stripes in her final story, when her grandfather threatened to smack her on the arse before abandoning her in a toxic wasteland with a man she scarcely knew.

Ian and Barbara next. Barbara’s hair is, I think, not quite right. But Ian’s quiff is right on the money, and the outfits are a reasonable match.

Here’s Victoria Waterfield, in a crudely rendered edition of the explorer’s outfit she wore while hiking around Wales the Himalayas in ‘The Abominable Snowmen’. She’s accompanied by Steven Taylor, who looks like he’s off to a Where’s Wally? convention.

Vicki and Katarina. For some reason I really struggled with these two. They’re both so…I don’t know, nondescript when it comes to outfit choices. I’m still not convinced I really nailed it. (Katarina’s dress is purple because I found an interesting piece of fan art where she was wearing purple, and besides, it’s my wife’s favourite colour…)

Brigadier Alistair Gordon Lethbridge Stewart. That moustache is a little too Air Force for my liking, and the hat is completely wrong, but at least it’s military. For Peri, I went with the pink outfit she wore in ‘Attack of the Cybermen’.

Dodo and Zoe. Dodo’s singlet is so near, and yet so far – what I’d have given for one with a donut! – but other than that it’s a reasonable likeness. Zoe is wearing the silver jumpsuit she wore when splayed over the TARDIS in ‘The Mind Robber’, where the camera lingers over her buttocks for far longer than is necessary. That may be why I picked it.

You couldn’t not put these two together, could you? I wanted a sailor outfit for Ben, but they didn’t have one. As a result he’s a bit nondescript – but stick him next to Polly, and they’re peas and carrots.

You’re spoilt for choice with Jo Grant – so many cracking outfits! – but in the end I plumped for the cowgirl ensemble she wore in ‘Day of the Daleks’, although mercifully you are unable to see up her skirt. I feel like Sarah Jane rather drew the short straw – she was the epitome of working chic for most of her run, right until that last story. But honestly, how could you not use it?!?

It’s a kilt, not a skirt, and I think I got the colours more or less right. Jamie is joined by Liz, who is in her Silurian outfit, and probably just about to run across a weir.

This was an easy one. All you need is the hair and it’s instantly Bonnie Langford, even without the deckchair polo shirt. Next to that, Ace looks positively Goth-like.

Tegan’s top is a little more strappy and a little less abstract than I’d have liked, but it’s a reasonable approximation and it does at least have that 1980s vibe about it. Inevitably, Turlough looks miserable. Well you would too if you went travelling in space and the only clothing you brought was your school uniform.

Both Romanas. Mary Tamm is a little..what’s the word…dull, and I’d have liked to do that rather splendid mauve thing she wore in ‘The Androids of Tara’, but there was nothing that matched, so the white gown won the day. Her later counterpart is dressed for running from Daleks.

Last but not least: Nyssa, wearing something that looks a little bit like a New Romantic cosplay on her ‘Keeper of Traken’ outfit. She’s in the company of Adric, who even has his badge for mathematical excellence, even if it has been placed rather awkwardly around his neck like an Olympic medal. He’s still a dick, anyway.

And that’s your lot. I’d love to do a monsters edition, but I don’t think they do sink plungers…

Greetings, fair traveller. Welcome to Tranquility Spa, a place to relax and unwind and escape from the hubbub and stress of everyday life. We invite you to sit down, take the weight of your feet and catch up with this week’s list of VERY IMPORTANT CLUES AND SIGNS that you might have missed while watching the Doctor and her fam run around the scorched Earth. Luckily, I’ve written them all down. You may thank me later.

You’ll recall, fairly early during the episode’s running time, that the intrepid foursome ran out of the main building on Tranquility Spa and found themselves up against a brick wall – or at least a reasonably disguised barrier. To those of us who’d seen The Truman Show, it was familiar territory – and like everything else in the story it erupted at breakneck speed, which meant it was easy to miss what was going on when the Doctor examined that energy wall. Let’s slow down the action and take a closer look.

Believe it or not, this relates to Turlough. Notice the chequered pattern that makes up the slab’s exterior? We may, if we squint, count the Doctors in squares – the top line is Doctors 1-3, while 4-6 and 7-9 appear beneath. This means that the red square right in the middle of the board corresponds with Davison’s Doctor, and thus the portal we can see behind his square is themed around the idea of centres – the Doctor, of course, having visited the centre of the universe during the events of ‘Terminus’. (While we’re talking about red squares, we should also point out that the Eighth Doctor – represented directly beneath the Fifth – visited Red Square in Revolution Man. But of course you all knew that.) 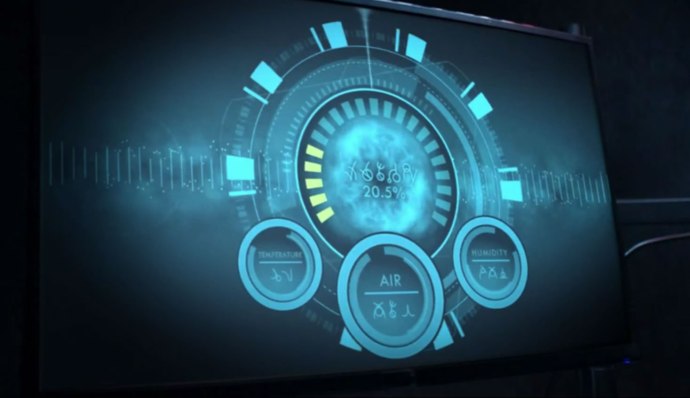 Notice the five illuminated markings round the edge? And the 20.5% in the middle? That wasn’t an accident. It stands, unless I’m very much mistaken (and I’m not) for Fifth Doctor, season 20, story 5 – also known as ‘Enlightenment’, in which Turlough faced up to the Black Guardian and redeemed himself, even though Tegan never fully trusted him. This probably all sounds a bit tunous, but lest we forget, the name Turlough comes from the Irish turlach, meaning ‘dry place’ – it’s a village in County Mayo and, more interestingly, a city in California with the zip codes 95380, 95381 and 95382 – corresponding DIRECTLY AND UNAMBIGUOUSLY with the years that Davison (represented by 5) signed the contract, first appeared on screen and then made his debut properly (80, 81 and 82 respectively). Oh, and the 3? The number of stories in the Black Guardian trilogy, of course. Need I point out that Mark Strickson was born in ’59, the reverse of 95? I need not.

The next image may be a little difficult to see close up, but suffice it to say that the cameras that make up its four separate sections are all numbered. Assuming that we can ascribe each number to a separate Doctor – and factoring in that Whittaker is technically the Fourteenth incarnation, if one factors in John Hurt – we can make connections as follows:

Let’s split it up and look for clues. As you can see, the top half of this is to do with zip codes: the numbers at the bottom of each video display each correspond to separate zip codes, creating a CLEAR AND UNAMBIGUOUS link to some unannounced (but long-rumoured) content from Big Finish. First up is an untitled Short Trip, narrated by Katie Manning, in which the Third Doctor and Jo visit Maine in 1984 and fall foul of a mysterious alien race wanting to invade Earth via the phone lines. There then follows an upcoming Sixth Doctor adventure in which the TARDIS materialises in nineteenth century Hartford, where they discover the inspiration for Injun Joe was a stranded Sontaran. According to the grapevine it features a sequence where the travellers keep missing Twain by a matter of minutes, prompting the Doctor to quip “And ne’er the Twain shall meet”, to which Peri rolls her eyes.

The bottom half is all about words: you’ll see that these two cameras are focused on the Tropical Vista Zone and the Peaceful Paradise Zone, both of which sound like levels from an abandoned Sonic The Hedgehog title. However, if we are to combine the words ‘Tropical Vista’ and ‘Peaceful Paradise’ and then rearrange the letters, you can see that we get ‘AFAR PLURAL APPOSITE VISIT’, which is a blatant reference to the recently released Thirteenth Doctor comic strip, in which Whittaker’s Doctor has a close enounter with Tennant’s Doctor during the events of ‘Blink’. Am I saying that the Scorched Earth we saw in ‘Orphan 55’ is linked to the unresolved cliffhanger from Class? No, I am not. I leave the dot-joining to you.

Gareth sent me a snooker video this morning, and it suddenly occurred to me that I’ve never seen these two together. (Gareth attributes this to Blinovitch, which is as good an explanation as any.)